Two weeks ago was Pete and Laura's wedding - in Corpus Christi Chapel. It was a lovely day, and we had a really great time celebrating with them and all their friends and family. The chapel itself is stunning - so light - and the rest of the college is beautiful too. We danced the night away, though not quite into the wee small hours. (Click through below for more pics on Facebook). 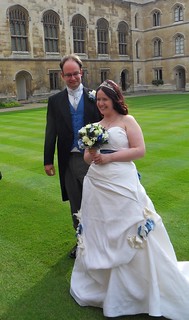 Then last weekend we decided that since the forecast was so lovely we might as well go and make the most of it - and booked ourselves a couple of nights in a B&B in Matlock Bath. Travelling up on Friday after work we arrived and simply went to bed. Saturday after an absolutely enormous full English breakfast we walked up the road to Matlock, and after much faff, found a bus to Bakewell, where we headed out along the Monsal Trail - which is one of the walks Julia Bradbury featured in her Railway Walks series.

The trail itself was really very busy indeed with other walkers and cyclists - including some old friends who I am embarrassed to admit it took me a minute to recognise out of context. It was a very pleasant walk though - unsurprisingly level and easy going. It was hot in the sun, but cool and shady in the tunnels, which were really rather fun. We struck off the trail at Litton Mills, and headed up over a couple of hills toward Taddington - for a quick drink in the Queens Arms and a bus back to Matlock.

Having followed the road down one side of the river into Matlock we figured we'd follow the footpath along the other side of the river back to Matlock Bath - not quite realising that due to the shape of the valley this would mean a climb and then views from the top of the cliff! It was a great little walk anyway - and then we finished the evening with a potter through Matlock Bath (which was heaving with people who'd come to see the illuminations) and a very tasty Chinese for dinner.

On Sunday, after a rather more restrained breakfast, we headed straight up the hill to the Heights of Abraham - a small theme park of sorts with lovely gardens, a couple of show caverns which were once lead mines, and a cable car ride back down to the other side of the river. We arrived in time for the first tour round the smaller cavern lower down the hill - which mostly concentrated on the history of lead mining. It was particularly fun since there were just the two of us and our guide. The big cavern at the top of hill was much busier, being a bit later too, and we were in a party of more like 30 - but it was still fun. Definitely a great way to spend the morning - with fantastic views from the top of the hill and from the cable car ride. And then it was time for the train home again and an Indian takeaway for tea :) (Again click through below for more photos). 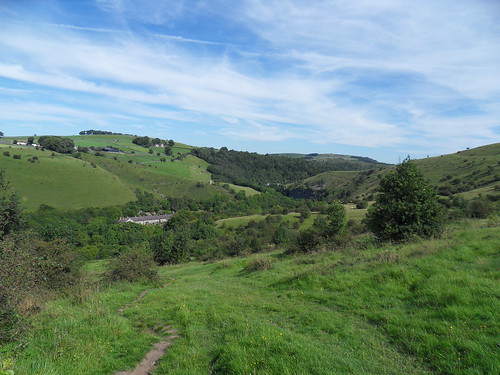 This weekend we're taking it much easier. We've both had fairly poorly tummies this week (mine started while we were away and returned again on Thursday evening after I'd been in Manchester for the day with UCU) - Mike's was bad enough to need a couple of days off mid-week. Hopefully we're on the mend now but it's definitely worn us out a bit! Enjoying the sunshine, playing some computer games, and maybe heading out to the cinema tomorrow afternoon will be the order of the weekend I think - and not much else!