A family weekend away 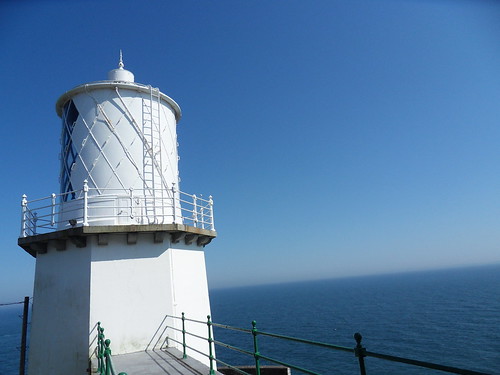 Just back from a fantastic weekend with all the family in Northern Ireland. We were up horribly early on Friday morning, and flew over to Belfast International, before getting a bus into the city for our third breakfast and to meet up with Mum, Dad, Em and John (who'd flown into City and hired a car, which Emily kindly drove us around in all weekend).

We couldn't get the keys to our home for the weekend until 4, so we drove up to Larne to visit Grandad. There we were later also joined by Steph, Dave, Oliver and Isobel - who'd come by ferry and had just spent a couple of days in Dublin. After a living-room-picnic lunch we headed down to Ballygally for a paddle on the beach. Then it was time to drive down to Whitehead, and head up through the golf course along a tiny private lane to our new home - a pair of lighthouse keepers cottages at Blackhead Lighthouse. We had a lovely evening in the sunshine, and chinese takeaway for tea.

On Saturday we headed off on a long drive cross country - to the Giant's Causeway. I've never seen it with the sky so blue, and the sea even bluer. Absolutely stunning - and a treat for Mike and Dave who'd not been before. After lunch we headed over to Carrick-a-Rede to cross the rope bridge to the island (which we mostly agreed is a lot less scary these days) and enjoy the views some more. Here we spotted kittiwakes and guillemots and razorbills (though it took some peering at the photos later to be sure). Em drove us back via the Coast Road, including the bit up the Tor Head road which is pretty spectacular - rarely has 30 mph seemed so fast. Grandad joined us again for dinner, and to stay overnight.

Sunday we had a quiet(ish) day - with a trip to Browns Bay in the morning where I was daft enough to brave the water for a swim (fun, but very cold). They dropped me and Mike in Whitehead on the way back to the shops, and we had a lovely walk along the bay and back up the cliff path to the lighthouse. Over the course of the afternoon we were joined by lots more of the family: both my dad's brothers and their wives (Alan, Sharon, Loudon and Averil), two of their children (Kim and David), one son-in-law (Oliver) and three grandchildren (Caolan, Oisin and Gemma). It was great to see everyone and just hang around in the garden in the sunshine - where I burnt my feet. Loudon, Averil and David stayed for dinner and we just about managed to squeeze 12 adults round the dining table! Mike and John went for an explore right round the cliff path and found the caves below the lighthouse. Everyone made a valiant effort and between us we polished off one of the six boxes of chocolates I won from the Chocolate Tasting Club last week.

And on Monday there was just time for Mike to take me to see the caves before we waved Steph and Dave off to get the ferry. We packed everything back into the car and headed into Belfast for a Guinness and a sandwich in the Crown Liquor Saloon - possibly the only pub owned by the National Trust. And we finished off the weekend with a visit to the Titanic Museum on the Belfast Docks - which was great. It's a spectacular building, and they do a really good job of telling the story not just of a famous ship which sank but of the company and town which made her.